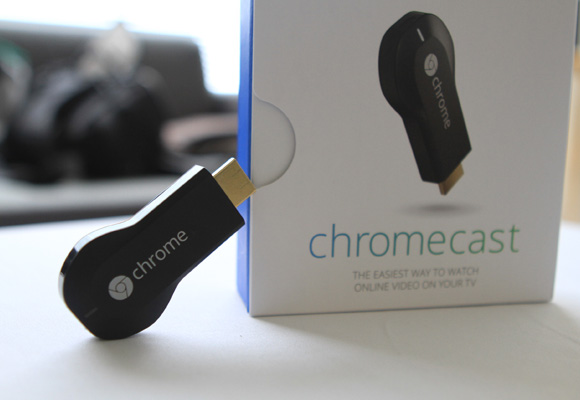 Sounds familiar? You’re talking to your friend about an excursion you did. At one point you tell them to hold on: ‘I’ll show you’. And you take out your smartphone and show some pictures. This inspires your friends to show you something and they get out their phones too.

The new Chromecast guest mode entitles you to share experiences with the same ease on the big TV screen. Imagine all being seated together, you cannot show pictures of videos because you’re all too far away from each other. The television will help you do this.

For those unfamiliar with the Chromecast stick: it’s a small HDMI stick you operate through your phone. You connect it straight to your TV and through your WIFI network you magically let appear things from your phone to your TV screen. Youtube videos, Netflix series or your own pictures. You can even broadcast your web browser on the screen or play a game. Since a few weeks this magic stick has a so called ‘guest mode’. This allows your friends to take over your TV screen with their phones without have to share the password to your WIFI network. From their side, no configuration needed either.

How to activate the guest mode?

As the host, first open your Chromecast to guest in the Chromecast application on your phone. You can do this by clicking on the name of your Chromecast (mine is called ‘Salon Eliksem’), selecting guest mode and activating it. You will see a pin code appear but your guests should not need it. The pin code will also appear as guest pin code on your TV screen. Your guests will connect to your Chromecast by as always selecting the cast icon in a compatible application. Mind you, your guests need to have the Chromecast application installed on their phones. Instead of their own Chromecast, they choose to ‘cast to nearby device’ and their phone will automatically be connected to your TV. Apparently this operates through inaudible squeaky noises that are emitted by your television and are recognized by your guest’s phone. Sounds very science fiction like but it works without giving it any notice. And if it doesn’t function, this is where the pin code comes is being used, I presume.

The amazing thing about the guest mode is the way multiple people direct the screen at the same time. In our case, we were watching Youtube videos from each other’s playlists. When I connected to my Chromecast, the screen mentioned ‘Koen has joined’. On my phone, in Youtube, I saw the same video (description, comments and related videos included) as my friends saw on their phone. When I switched videos, not only did it appear on the TV screen but also on the video page on my friends’ phones. My friends could add videos to the TV’s playlist so they didn’t interrupt the video each time. We built a playlist together, each with our own phone. In this way, 4 people shared content on 1 screen.

It’s hard to describe but the Chromecast guest mode gave us a wonderful evening. Everyone talks about the same thing (whatever is showing on the TV screen at that moment) en with a shared playlist you build the party together or cheekily take over with a funny cat video. Thanks to applications like the Chromecast guest mode TV continues confirming it’s central place in our living rooms.

Proximus Innovation launches its very first product: Amicimi. Amicimi, in Latin translates to ‘my friend’. Forever ready to help. The name is well chose for the application that has been developed: an SOS button connected to your smartphone...

The coolest gadgets from MWC Barcelona

At the Mobile World Congress in Barcelona there was so much more to see than just new mobile phones...

We are looking for people who will test the safety of our Homeview camera in a controlled way...