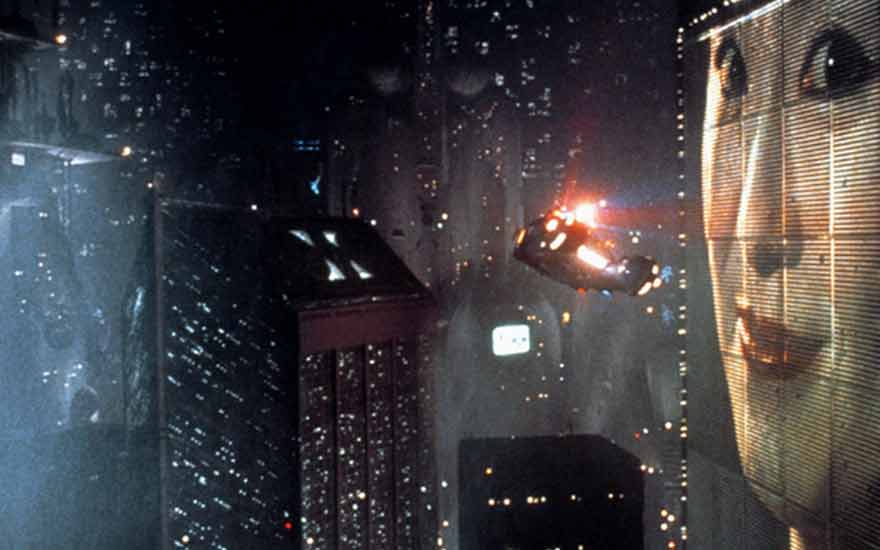 “The future will go beyond Blade Runner. We will be able to see and feel a projection of wood. Things that are visible will be made tangible, too, thanks to high-tech screens.” Guy Van Wijmeersch on how image technology will dominate our society. “Fantasy or reality. We are only as strong as our imagination.”

“People become immersed in virtual reality – until they get hungry.“

or sticking them to the wall “The miniaturization of technology opens up the possibility of using screens like wallpaper or painting them with pixel paint. Literally every wall, façade or floor becomes a screen. So you can project virtual works of art in your home. A different one every minute, so that each work fits your mood.”

“As in Blade Runner and Minority Report, projections will dominate the street scene. Iris recognition and beacons that receive signals from your smartphone and wearables will determine where you are and what interests you. Whichever side of the street you look at, personalized adverts or news will be projected onto your retina.”

“I can imagine that people will lead a sort of second life in virtual reality. But they don’t become totally immersed in it, as they do in The Matrix. You’ll get hungry at some point, won’t you? I believe in the ‘digital twin’: a bits-and-bytes reproduction of yourself in a parallel, virtual world. Your ‘better half’ simulates your attitude, location and mood digitally via sensors.”

“Cave displays come close to the Star Trek ‘holodeck’ idea: the floor, the ceiling and the walls consist of projection screens. They simulate an alternative reality. In the very long term, it will even be possible to make the texture depicted ‘palpable’ using electrical discharges. So how will we Skype then? You and the person you are talking to will share an environment with the same smells and textures.”

“In the distant future, we will be able to view the invisible radiation in and around people and objects using cameras. Think about brain activity or fluctuations in skin temperature. The inner emotions of the person you are talking to will be projected next to their head. So you can respond to them better.”

Video conferencing: even before the arrival of talking pictures, Fritz Lang suggested the idea of the video phone.

Hologram: Star Wars made the hologram hugely popular. The technique exists and even dates back to the 19th century, but Van Wijmeersch does not believe it will be decisive in the future.

Dominant image culture: in 2019, the Los Angeles skyline is dominated by the projection of a woman eating a cherry, an iconic image from film history.

Holodeck: an advanced form of virtual reality. In an enclosed interactive space, people and objects are simulated using holograms, images and force fields.

Virtual reality: to secretly tap energy from people, machines create The Matrix. A virtual world in which people dwell unsuspectingly and everything appears to be normal.

Intelligent advertising screen: an iris scanner determines the identity and interests of the passer-by to project the most personalized advertising messages on the screens.