Drones services within reach of every business 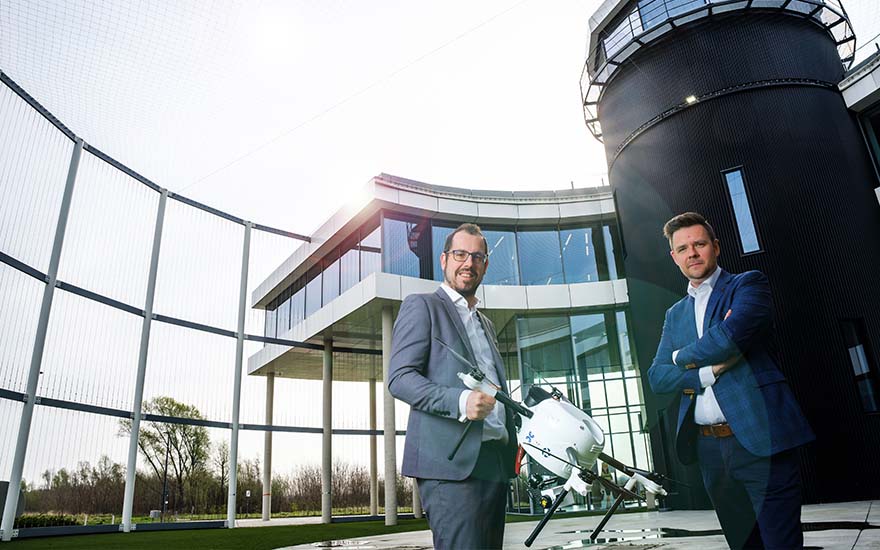 A drone network with national coverage that companies use as a service. That is the dream of the 6th NeTWorK consortium and it is technically possible. The rollout of D-Hive's drone installations in the port of Antwerp-Bruges proves this.

6th NeTWorK is a consortium focused on the development of drone services. The partnership is based on DroneMatrix, a developer of drones and drone software, SkeyDrone, a service provider for drone aviation, and Proximus. "We offer drones as-a-service," says Frederik Winters, Director Business Development at DroneMatrix. "The customer does not own the drone or the network but instead buys a drone flight as a service."

World’s first drones as a service in Antwerp

These services are being rolled out in the port of Antwerp-Bruges under the name D-Hive. Within one year, there will be six installations in the port where drones will depart from. "We have already set up installations in various places around the world," says Frederik Winters, "including Spain and Singapore. But until now, customers have always chosen to purchase and manage the installation themselves. However, the port of Antwerp-Bruges is the first to adopt the service model. It is the first commercial installation where we work as a service."

We offer drones as a service. "The customer does not own the drone but instead buys a drone flight as a service.

The fact that this world first happens in Antwerp is no coincidence. The port has been looking at the potential of drone flights for some time. Antwerp-Bruges was the first port in the world to tender for drones. "DroneMatrix is the only company on the Belgian market that makes its own drones," says Frederik Winters. "That's how we very quickly ended up working with each other." SkeyDrone manages the drone traffic for the project, while Proximus stepped in as a partner for the data traffic between the drones and the platform for managing the devices.

5G tipping point in drone use

"A company requests a drone flight using a digital platform," says Steven Mees, Enterprise Account Manager at Proximus. "That system - which is run in our data center - also receives the video images that the drone's camera transmits via our mobile network." Proximus carried out tests with 5G in the port of Antwerp-Bruges. The auction of the 5G licenses is imminent. "The port of Antwerp-Bruges will be the first major area where Proximus rolls out 5G," said Steven Mees. The arrival of 5G is expected to create a tipping point in the use of drones.

Our dream is to build a drone network with national coverage, just like the mobile network.

"The plan is to set up additional installations in the port," continues Frederik Winters, "so that not only the port authority but also any business in the port area can access drone services easily." There is no lack of potential applications. Drones can carry out surveillance tasks, such as checking a perimeter or inspecting installations. In the future, drones will also carry out transport flights, such as transporting samples between chemical plants and the certification companies around the port.

D-Hive's partners have noticed that the interest in drone services is growing rapidly. Other ports are also closely following what the port of Antwerp-Bruges does. "But the case is just as easily applicable in other domains," says Manuella T'Joen, product manager IoT at Proximus. “A drone network can also be interesting for cities or for industrial sites.” For Proximus, the development of drone services relies on the combination of many areas of expertise. "It's not just about the IoT aspect and the connectivity through 5G," Manuella T'Joen continues. "There is also AI and security, including for image processing."

With D-Hive in the port of Antwerp-Bruges, the 6th NeTWorK consortium is making an impression already. However, ambitions go much further. "Our dream is to build a drone network with national coverage, just like the mobile network,” says Frederik Winters. The first step has already been taken and that in a challenging environment. Whoever can build a drone network in the port of Antwerp-Bruges can build it pretty much anywhere else.

Smart stock management, asset tracking and mobile warehouse staff. These are just a few of the solutions that Proximus has to offer in the Transport and Logistics sector. Want to know more?

Discover all the possibilities