AXA Belgium: a smart building for a new work culture 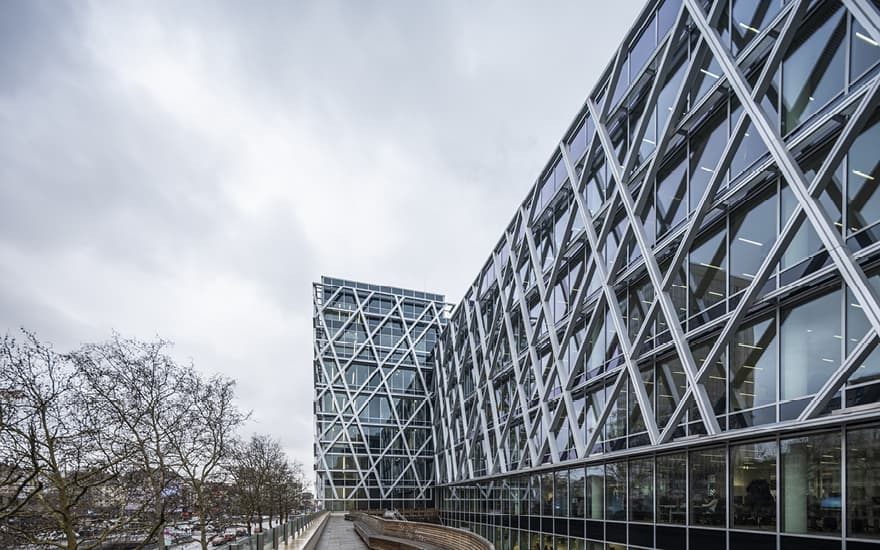 At AXA Belgium a smart building is one link in a greater whole. The insurance company has gathered everything together at its new head office in the center of Brussels: a new way of working, underpinned by smart technology in a smart and easily accessible building.

For this project AXA Belgium received a nomination for IFMA Facility Project of the Year.

Until 2017, AXA Belgium rented a building in Watermael-Boitsfort, on the outskirts of Brussels. They thought carefully before moving to the city center. “The idea of adopting another approach arose back in 2012,” says Raf Boterdaele, Head of Building & Facilities Management at AXA. “We were looking for a solution that would benefit the mobility of staff in the long term.”

They chose the old Engie Electrabel head office in place du Trône. The historical part of the building – which once served as a hotel – was retained, the second wing underwent a thorough renovation and a third section consisted of a new building, with a horizontal rather than a vertical structure. This creates more interaction among the staff.

Watch the video of AXA Belgium

The result is a building with a large horizontal surface area – no less than 50,000 square meters altogether, of which 35,000 is for the offices and the central forum with the company restaurant. “It’s a modern office building but one with character, with a story,” Raf says.

“And above all, the location provides huge added value in terms of mobility. The starting point in the design process was to make the building inaccessible by car but easily accessible by public transport. Central Station is within walking distance. There are metro and bus stops literally in front of the door. In addition, we’ve provided a large bicycle parking area, including facilities to take a shower after your ride in to work.” 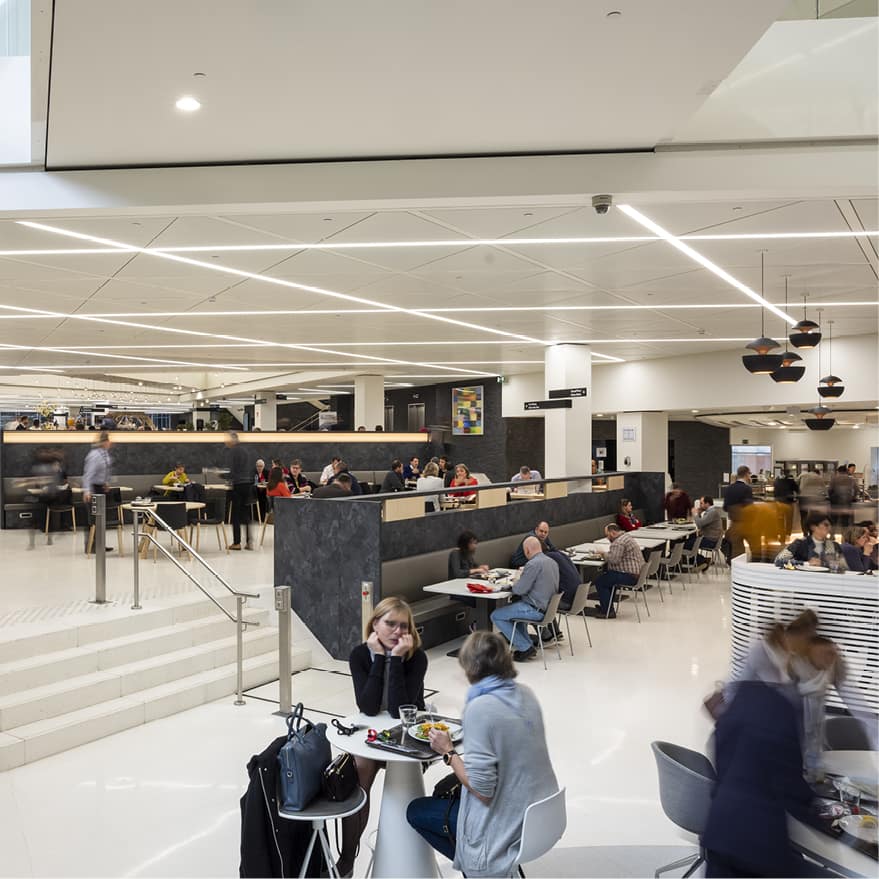 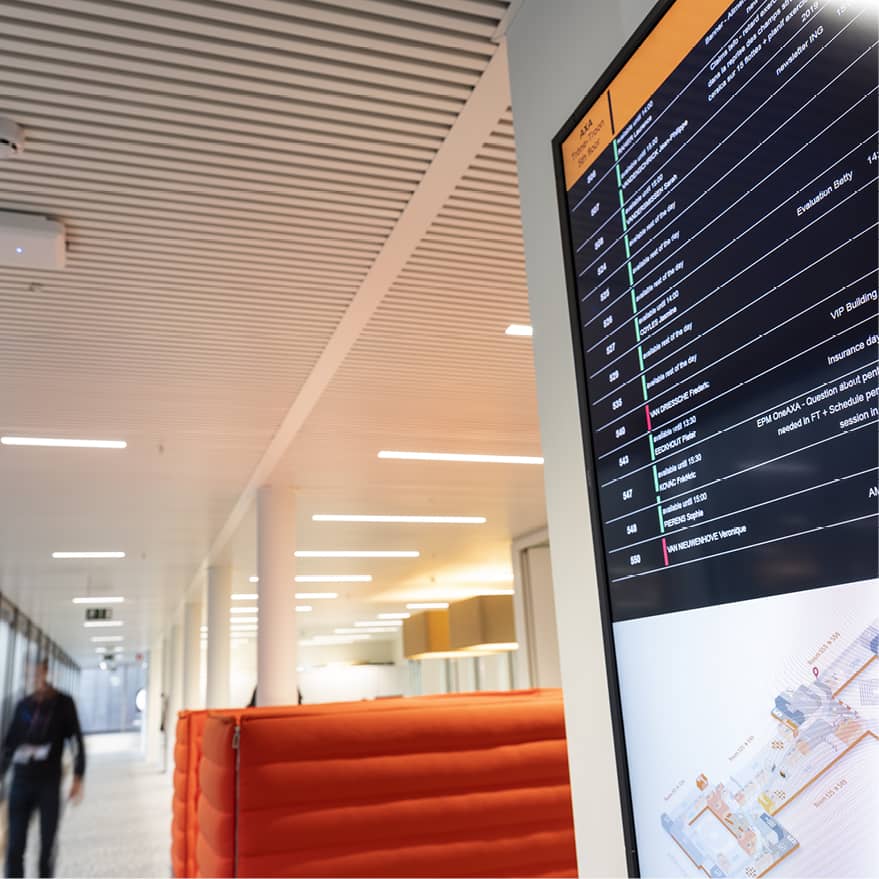 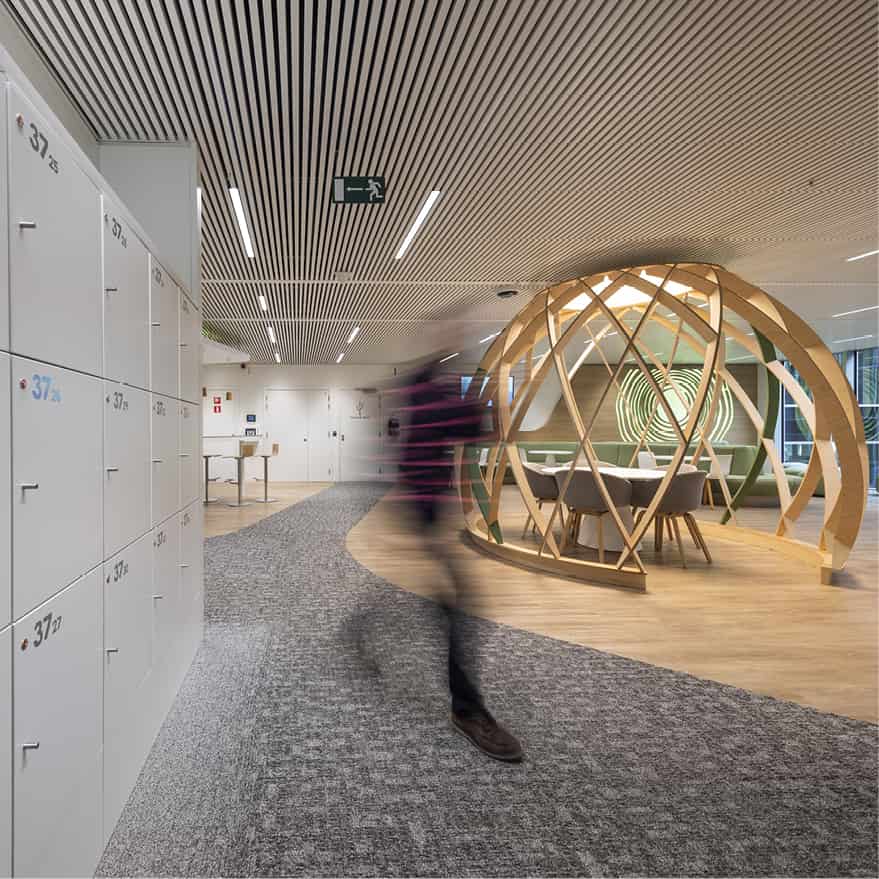 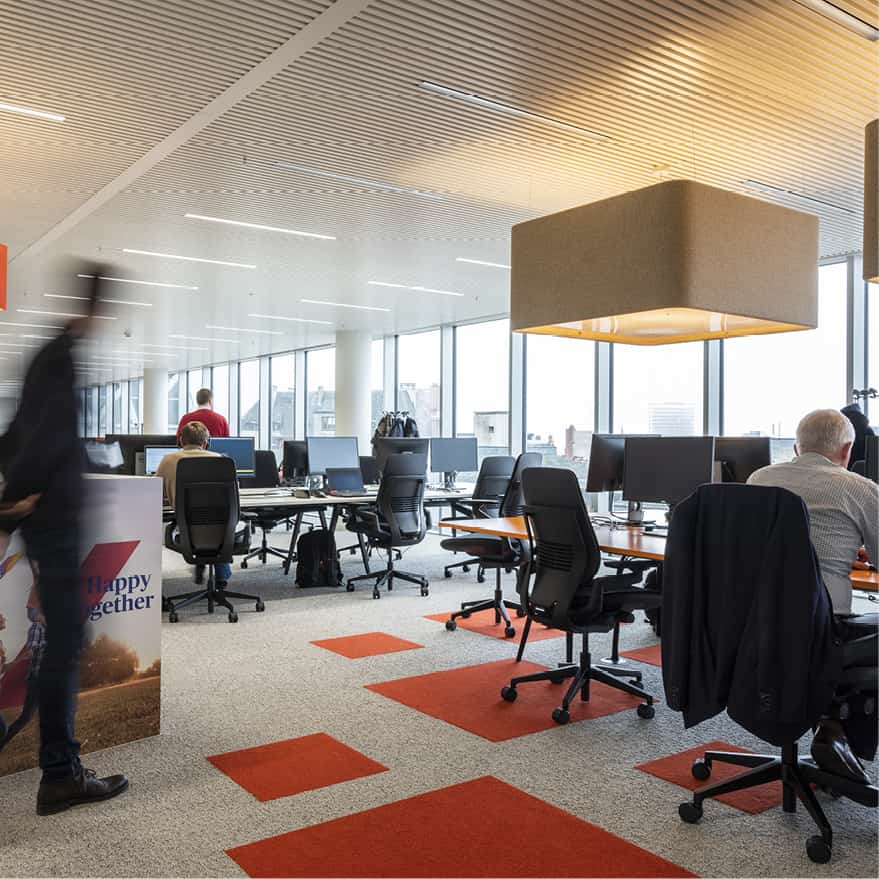 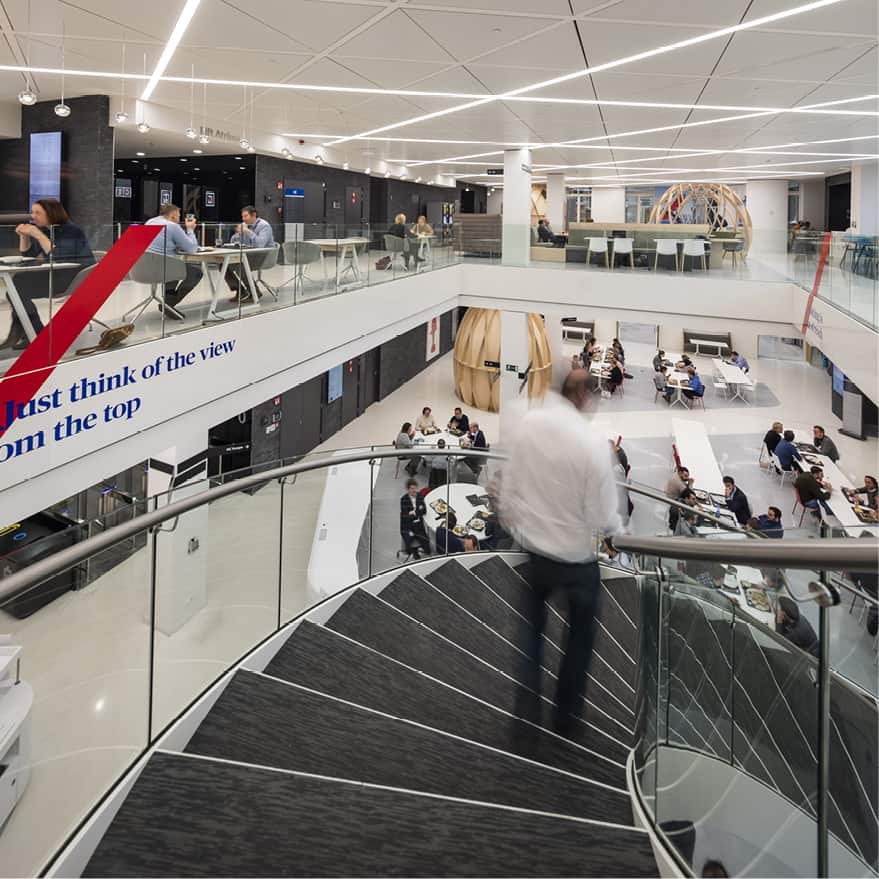 A suitable space for every job

AXA Belgium switched to the new way of working back in 2014, with staff given the option of working from home as well. “We’ve followed this line firmly in the new building,” Raf explains. “For the layout of the offices, we adopted the principle of the activity- based workplace.”

This means that the various areas are geared to the type of work. So there are meeting rooms of various sizes, rooms for work that requires extra concentration, spaces to hold informal gatherings, telephone conversations, brainstorming sessions, various bubbles – these are small rooms with three chairs and a small table – dynamic and smart rooms, etc.

Above all, AXA Belgium was looking for a solution that would catch on. At the first NWOW location in the Marnix building, the company had seven workstations per 10 employees. Now there are just six. 1,540 workstations are provided for the 2,600 or so staff members who come to the office in Brussels. “The ratio of six to 10 instantly makes a difference of a few thousand square meters of office space,” says Raf.

“The impact on the budget is huge. But, of course, it has to remain workable.” So AXA Belgium provided an IoT solution in the building to closely monitor the use of offices, workstations and meeting rooms. Spacewell (formerly MCS Solutions) worked out a solution based on the Proximus LoRa network. In this way, the IoT applications are kept fully separate from the AXA Belgium IT environment and there can be no impact on network security.

We gear the building to the staff. We measure the use of the workstations and meeting rooms via IoT. 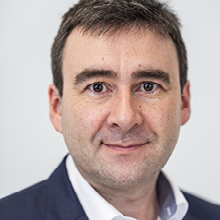 In practical terms, 1,850 sensors have been installed in the building which register the snapshot occupancy of workstations and meeting rooms. Every six minutes, they send a report to the IoT platform via the LoRa network. “Analyzing this data gives us an insight into how staff use the available infrastructure,” Raf explains. “That enables us to further optimize the way the building functions.” In addition, there are around 50 ‘comfort sensors’. They measure the temperature, humidity and CO2 levels, among other things.

“The comfort sensors collect data that the IoT solution puts online straightaway,” says Sven Toelen, Global Marketing Director at Spacewell. “So the application provides a form of quality control of the technical installations in the building. The reports immediately show whether the heating and ventilation system is working properly.” A third part of the IoT process will record the use of the bathroom facilities so that AXA Belgium can gear the cleaning of these areas better to the actual needs of staff, among other things.

The combination of renovation and new building enabled AXA Belgium to integrate the digital component right from the start of the project. “Everything is digitally equipped,” says Raf. “There are LED lights everywhere, there is a motion detection system and we achieved the internationally accepted BREEAM certificate for sustainability.” The reduction in the surface area that we needed is the single biggest environmental parameter. Fewer offices automatically means less consumption. “The project continues to evolve all the time. Step by step we are collecting more data, so that we can make better analyses to optimize processes.”

Reporting remains the most important criterion. “We aim to obtain as much useful information as possible from the data that we collect and analyze and this, in turn, provides the input for new initiatives.” Among other things, AXA Belgium is thinking about developing an app for staff that combines everything: booking a meeting room, consulting the restaurant menu, reporting a technical issue, etc.

“For the staff, it really was a huge change,” Raf goes on. “They work fully digitally now, but autonomously as well. Results and trust are more important than the number of hours worked. In this way, the new building underpins an important cultural change as well.” AXA is an international insurance company and asset manager with a 100 million clients and 160,000 employees in 62 countries.

Raf Boterdaele gained a degree in bio-engineering from the University of Ghent. After 13 years as Manager Buildings & Facilities at Mercedes-Benz BeLux, he moved to the role of Head of Building & Facilities Management at AXA Belgium.

Sven Toelen has a degree in commercial engineering from Antwerp University. He works as Global Marketing Director at Spacewell.