Wi-Fi in the stadium 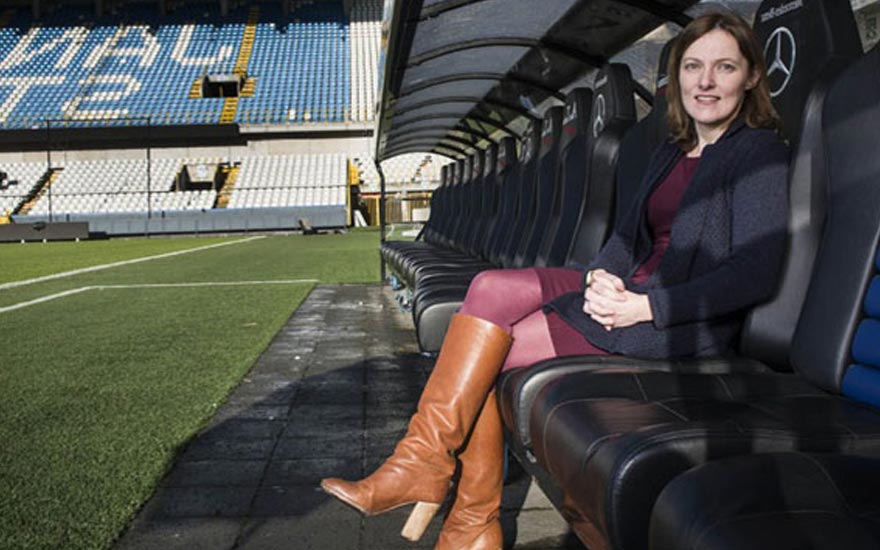 Football club Club Brugge is intensifying its interaction with its supporters. This is being done in part via its own app and various social media in the first ever ‘connected’ stadium of the Belgian Jupiler Pro League.

Club Brugge appeals to a very broad range of people. In total, there are about half a million fans, which includes the supporters who regularly attend matches in the stadium and supporters at home and abroad. “In recent years we have played a real pioneering role in the communication with these different types of fans,” says Dagmar Decramer, Operations Manager at Club Brugge. “We are thus striving to have as much personalized contact as possible.” The app launched by the club at the end of last year is being used for that. “The app carries the right information to the right profiles, from the die-hard fan of the Blue Army, or the father with kids that only comes to watch the match on Sunday afternoon, to the sofa supporter who follows the match at home. We make sure everyone is always up to date with what’s happening in and around the club.”

Active community
The figures already clearly show that Club Brugge can count on an active online community. Within the space of two short weeks, the app already had 42,000 users. In addition, the club has another 200,000 friends on Facebook and 47,000 followers on Twitter. “To increase the interaction with the fans, we’ve decided to offer Wi-Fi in and around the Jan Breydel Stadium,” Decramer continues. Not a simple task, as it turned out, because the infrastructure had to be able to cope with peak moments with users in a full stadium. They are closely packed into the stands, which technically was an additional challenge. Club Brugge undertook a market analysis and, in the end, chose the proposal made by Proximus, based on a specific solution from Cisco for Wi-Fi in stadiums.

Online during the interval
Proximus installed 400 access points in and around the Jan Breydel Stadium. Wi-Fi has also been provided in the canteens and offices and on the supporters’ square just in front of the stadium. Proximus connected the access points to a fiber-optic ring. “From the initial analysis of the Wi-Fi use, we can see that the supporters go online en masse during the interval,” says Decramer. “They check facebook and Twitter, and surf to Sporza to re-watch videos of the game.” So far Club Brugge has recorded a peak of 6,000 simultaneous connections. The installation is designed to cope with 14,000 simultaneous users. In addition, 23 security cameras and 175 cashless payment terminals have been connected to the network. “In the canteens the supporters pay with an electronic debit card (Blue Club card) that they have preloaded online – or on the spot at a charging point.” That’s not only safer and faster than cash; it also provides the club with extra information that allows it to further strengthen the bond with the supporter.

About Club Brugge
Club Brugge dates back to 1891. The club with number three as its registration number has an impressive list of awards and titles: 13 national championships, 10 cup championships and more than 200 victories in 40 rounds of European competitions.

Dagmar Decramer is an economist. She worked for five years as Business Development Manager at Uplace, the real estate company run by Club Brugge’s chairman, Bart Verhaeghe. Since 2012, she has been Operations Manager at Club Brugge.