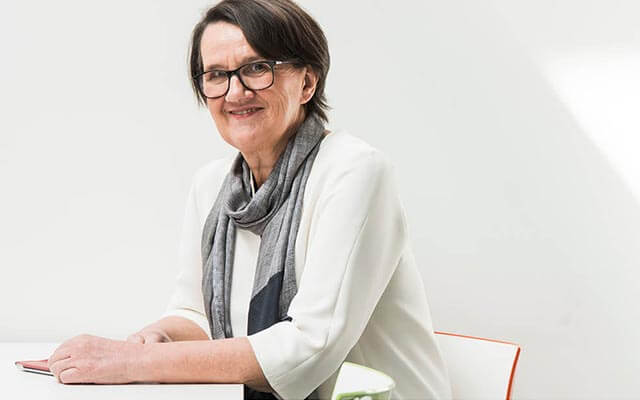 The arrival of a supercomputer, the development of solutions for e-learning and the migration to SAP HANA: these are just some of the ICT projects currently underway at the KU Leuven. “Despite all the technology, in ICT you always have to put people center stage,” says Annemie Depuydt, ICTS director at the KU Leuven.

Annemie Depuydt is a one-company woman. The ICTS (ICT systems) director comes from Merkem, in Westhoek. She studied at KU Leuven and then began working there, first as a programmer-analyst and later as a project leader. Since 2008, she has headed the ICTS division. “The university offers a fascinating environment for working with ICT,” she says. “Not only is technology constantly evolving, but so is the organization in which we work.”

For instance, the past few years have seen the integration of various colleges from the Associatie KU Leuven. “This was a long process that presented many ICT challenges, including in terms of teaching environments and administration.”

Annemie Depuydt’s ICT team not only manages administrative applications and infrastructure, it also takes care of the ICT facilities that support education and research at the universities and colleges. “We will shortly be home to the fastest supercomputer in Flanders, among other things,” says Depuydt. The supercomputer is an initiative of the Flemish Supercomputer Center – a joint project of the five Flemish university associations – and is housed in the data center at the Leuven university.

“The supercomputer allows us to offer our researchers, as well as start-ups and businesses, access to huge computing power. Among other things, we want to support developments in big data, the Internet of Things and all sorts of simulations.”

The university ICT team is currently focusing a great deal on new e-learning solutions, too. “A huge procurement contract is under way for video streaming and recording. The aim is to provide footage for students during their classes – whether conventional or online – that they can watch again later.” KU Leuven ranks among the international leaders in online education. The university is part of the edX project at MIT and Harvard.

This provides a platform for online classes, given free of charge by the most renowned universities from all four corners of the world. “It is a great way of establishing a global profile for your university,” says Depuydt. “Millions of students use edX to look for information.” The university is now taking its first steps in the development of MOOCs (massive open online courses) for edX. “Professors and researchers provide the content, but the ICT department acts as project leader and is responsible for the platform.”

During Easter weekend, the university ICT department migrated to SAP HANA. “The availability of in-memory computing creates new possibilities,” says Depuydt. “We completed a lot of this project ourselves, so now we serve as a reference for other universities and colleges.” The rapid succession of far-reaching ICT projects at KU Leuven did not escape the notice of the Data News editorial team, either. The ICT specialist publication named Depuydt ICT Woman of the Year. In a complex organization like KU Leuven, only a strong personality can maintain harmony, the jury’s report said.

“To be honest, I was amazed to be nominated,” Depuydt  says, “but obviously, it’s wonderful. I received lots and lots of congratulations and great reactions. And of course I support the initiative because it helps make women in ICT more visible.” Depuydt sees two problems here. “There are few women in top positions in ICT. The inflow is small, so there is little through-flow. What’s more, the few women there are flow through less than men.”

She herself has never had any problem working as a woman in a male-dominated sector. “You have to let women talk about ICT, not about the fact that they are women. That’s the best way to bring more women into the sector.”

Tips for the CIO

1.    ICT is about people
“However technical ICT may sometimes seem, basically it’s always about people. This is a starting point you should never lose sight of as CIO. Ultimately, people – users of an ICT service – are always at the center of what ICT does.”

2.    You can’t just hope for the best
“Anyone who thinks you can just hope for the best is mistaken. As CIO, you can never just sit back and do nothing. You have to follow the market closely, make sure you keep up. You don’t necessarily have to be a major innovator in every field, but you at least have to keep an eye on things and make sure you don’t get left behind.”

3.    Bring business and ICT into line with one another
“Business and ICT don’t always speak the same language. Sometimes ICT is guilty of using technical terms and difficult acronyms. That needs to stop! The CIO has to explain in practical terms where the added value of a piece of technology lies. It’s a matter of translating for business.”

4.    Ensure open communication
“Communication is very open between universities, both within Belgium and with institutions in other countries. There are lots of user groups, and we meet one another at user conferences, etc. We share a lot of information and discuss our experiences. University CIOs come to us on reference visits, and we go to them. This exchange makes everyone stronger. All too often, I see company CIOs shy away from an open attitude like this. But there is no need for that. The competitive advantage of a company doesn’t lie in the use of a particular network technology or a piece of software, does it?”

Annemie Depuydt studied geography and IT at the KU Leuven. Since 2008 she has headed the ICTS (ICT systems), division, which provides ICT services for the university and colleges of the Associatie KU Leuven. ICTS is the unified ICT department of the university that combined the two historical ICT units, the computer center and the operational ICT department. Annemie Depuydt leads a team of 230 staff members.