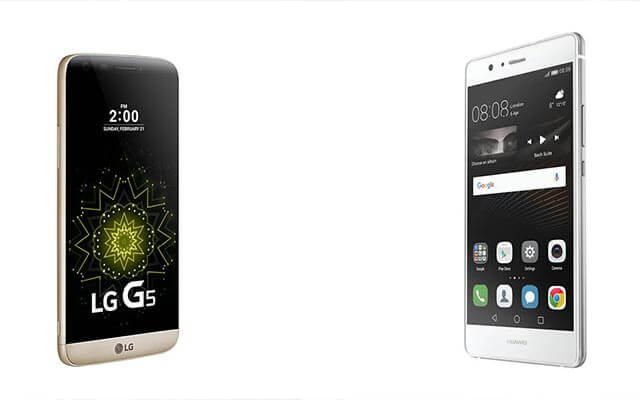 The P9 Lite lacks the double Leica cameras of its big brother, the P9, but it costs less than half the price. So it’s a great buy with lots of up-to-date features, including the fingerprint sensor. The LG G5 is a high-end smartphone that stands out thanks to its lovely finish, always-on screen and the option to add extra modules.

Little brother holds its own

The P9 Lite is a great telephone for those who don’t want to shell out for the Huawei flagship but would still like many of the features of the top model in the series, the P9. This is a very thin device with a 5.2˝ screen and full HD-resolution, which still fits in your trouser pocket. The metal casing comes with a white, black or gold finish. The competitive price makes this an attractive device, too.

The P9 Lite runs on Android 6. It has 16 GB of storage space and can hold two nano SIM cards. If you don’t need both, you can use one slot to expand the memory using a micro-SD card. The battery has a capacity of no less than 3000 mAh. Another handy feature is that the fingerprint sensor on the back works no matter.

The LG G5 is a premium smartphone based on the latest Android OS. Its wide-angle lens and laser autofocus make it great for taking photos and filming. Another very handy feature is the always-on display. This means that the most useful information remains permanently visible on a slightly dimmed screen. So you don’t need to tap the screen to quickly check the time or see new messages or missed calls, but the device still uses very little power.
The battery in the modular G5 can be changed despite the aluminum casing. The underside clicks off, which means you can add extra modules yourself. A camera module is already available with physical push buttons, a wheel and an extra battery, plus a Bang & Olufsen Hi-Fi DAC.