Transformation as a survival strategy 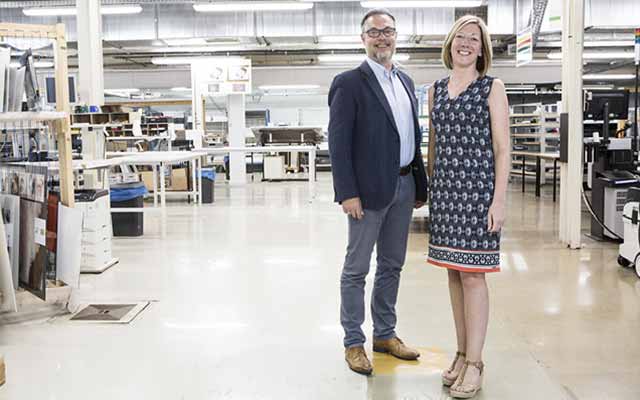 Many companies are seeing their business model turned upside down in a flash with the arrival of digitization. We asked Stef De corte and Ilse Van Vaerenbergh of smartphoto group about their recipe for success. In 15 years they went from developing conventional photos to becoming one of the biggest players in e-commerce.

To start this story about the future, first we have to go back in time. To 1999, the year the euro was introduced and Stef De corte went to work at the then Spector Photo Group in Wetteren. At the time, the group had a good reputation and a considerable turnover from developing analog photos. Until, that is, the digital age arrived… and everyone switched to digital photograph in a flash.

Heading straight for the abyss

“We saw the first startups offering digital printing appear in around 2002-2003,” says CEO Stef De corte, looking back. “But the VGA quality of digital cameras at the time was terrible, with barely 1.2 megapixels, whereas an analog print offers the equivalent of 10 to 12 megapixels. So that’s ten times better. What’s more, in 2004 we had one of our best years as an analog developer. So we didn’t really worry about it much. Digital was virtually non-existent on our market.

But then, in 2005, barely a year after our best period, our turnover dropped by 40%. And the same happened the next year. With most disruptions that I hear of now, people start getting nervous with a fall of 3 or 4 per cent. But with us, the turnover fell by almost half, year after year. Something had to be done quickly.”

At the end of 2005, the group carried out a capital increase via the stock market, on the one hand to pay off debts but, above all, to inject money for a thorough transformation. “To be able to survive, we had to reduce overheads straight away, restructure, close plants, etc.,” Stef goes on. “But we soon realized that just closing plants and bringing down overheads would never get us out of the hole entirely. We had to build a new future.”

The company found this new future in digital photography: “In the early years we simply converted our analog printing process to digital. Instead of sending in a roll of film, we asked our customers to send their digital photos on CD or via the Internet. At first that worked, because the customers didn’t know any better themselves. We even enjoyed huge success with it. Until 2009, that is, when the digital printing market exploded, with astronomic increases in sales, year after year, that were two or three times higher than the previous year.”

Not a question of technology

Another company would have patted itself on the back, relieved at having come through the crisis, but in Wetteren they had learned their lesson well. “In 2006 we already knew that the astronomical increases weren’t going to last,” says Ilse Van Vaerenbergh, General Manager Belux.

“We predicted that people would just no longer feel the need to have everything printed. Certainly not in the volumes from the analog age, because they could now look at digital photos before they were printed. As so we wondered: why would people want to keep on printing? Where is the added value for them? And that took us to products like calendars, photo albums, Christmas cards, gifts, etc. Ideas where people would really opt to have their photos printed. So we shifted the focus.” “When things get turned upside down, there’s no point looking to technology,” De corte chips in. “You have to ask yourself how consumers are going to adapt their behavior.

People take a couple of years to realize that something no longer has any added value. But once they realize that, then the disruption suddenly hits hard. So as a company you need to have been working on it for much longer. When our consumers realized that these digital prints weren’t what they needed, we were already prepared with a new product offering.”

These days, the now renamed smartphoto group brings out about fifty new products a year. De corte: “In the past we brought out two and it took six months before anything was launched. Now we work with weekly reports. Every week we want to know what sold well and what didn’t. In our marketing, too, we test a lot more and a lot faster. Or even ̀live’.

Whereas in the past we tested for six weeks and then did the same thing for three months, now we test for six hours and do the same thing for three days. The pace is totally different.”According to Van Vaerenbergh, this urge to modernize is now so firmly entrenched in the group’s DNA that they don’t even realize it anymore. “Our people get on with it by themselves. We have a product ideas mailbox where anyone in the company can drop any idea for a product or new features. It does very well. We then test every idea to see it if can contribute anything for our customers.”

The ship in the storm

De corte confirms that new ideas flood in every day, “but we also say ‘no’ more often than ‘yes’. After all, first and foremost, we have to stay on course. Big companies have the budgets to bet on various horses and move in several directions. And small companies and startups still have the freedom to try everything out. But medium-sized companies like ours? They can’t afford to experiment in seven different directions and put money into it, certainly not in times of disruption.”

According to De corte, transformation has more chance of succeeding if the company and its processes are stable. “Compare it with a ship that has to sail through a storm. If everyone has to go looking for the oars, no-one knows the right stroke rate and if there’s been no discussion about who’ll climb up the Mizzen-mast, no-one will survive the storm. When IT consultants talk about transformation and disruption, they want to sell their digital strategies. But the secret of a successful transformation lies in the stable, internal processes. Of course, that sounds far less sexy so you’ll hear few IT consultants airing such views.”

Van Vaerenbergh agrees: “It doesn’t have to be big, complicated processes, on the contrary. You just need sound, stable, basic processes where everyone knows what they are doing. Within this clearly marked space, you arrange for freedom to create, to try out new things.”

Make sure you have a grip

“There’s absolutely no need to go looking for the perfect hierarchical structure, either, because it doesn’t exist,” De corte concludes. “If it did, everyone would use it. It’s just a matter of maintaining a structure that is workable for as long as possible. If you constantly change it, then everyone loses their bearings. Only if the processes are strong can you become very agile and try out new things.” Don’t be put off the by the title: in his latest book, Menno Lanting writes in his typically plain style about two of the biggest hype words of the year: disruption and transformation.

On the basis of a few practical business cases involving successful and unsuccessful transformations, the author looks at the disruption phenomenon and how organizations deal with it.The great thing is that he also includes failed projects. And what emerges? Companies seldom go under as a direct consequence of disruption. Far more often a project goes wrong because companies no longer manage to respond to consumers’ changing needs.

‘The disruption paradox’ debunks the stubborn myth of disruption, outlines the hidden paradoxes and puts forward five steps to real innovation. So it is a practical guide for business leaders who want to transform their organization.