How real-time data can make The Tour of Flanders safer 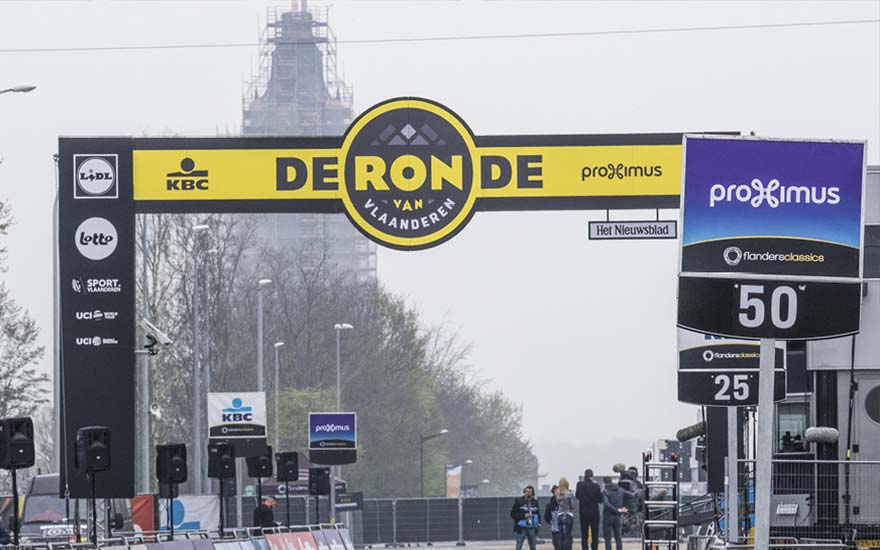 The Tour of Flanders - De Ronde – brings with it the usual safety and security challenges. This year, for the first time, the police called on Proximus Realtime Crowd Management to monitor the crowds.

More than just the race

The Tour of Flanders, known as De Ronde, is a cycling event at which hundreds of thousands of spectators line the route. Its epicenter is the hilly area in the Flemish Ardennes. What makes De Ronde special is its dynamic character: both the cyclists and the throng of onlookers move along a distance of 260 kilometers.

Proximus Realtime Crowd Management offers the police an overall view of where the crowds are and how they are moving. This is done using the signals from mobile telephones that Proximus captures. By extrapolating the mobile network, we gain an accurate picture of how many people are present at a given location, at any given time.

Use location data to your advantage.

During De Ronde, the police, fire and medical services each man a dispatching unit in the Oudenaarde fire station. They watch the images on the security cameras and closely follow the data generated by Proximus Realtime Crowd Management. Dashboards and heat maps display the current situation on the ground. If a zone is blue, then it is relatively quiet, whereas orange or red spots are already buzzing with activity. Emergency planners whose task is to maintain security play a crucial connecting role between the various emergency services. They get together every two hours to assess movements along the route, among other things. 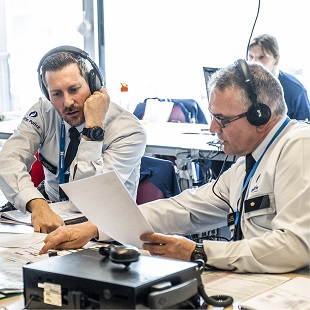 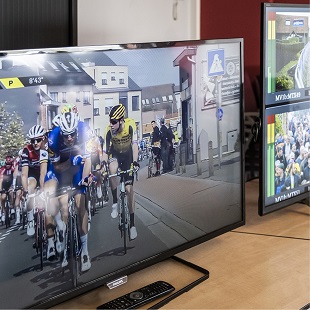 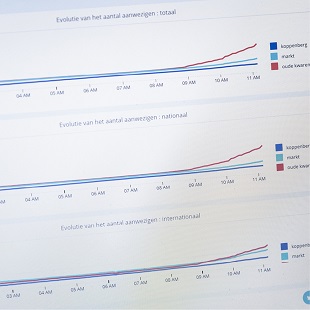 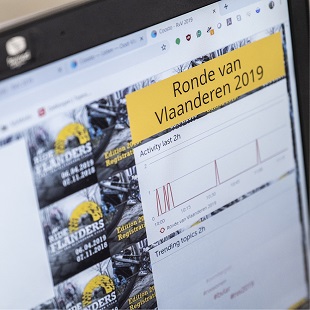 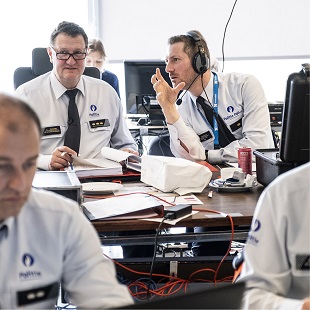 Tom De Bleeckere is one of the emergency planners who maintains security. “We not only ensure security in and around the race, but we also have to be able to respond appropriately when things happen outside of the race, such as when someone has a heart attack, or when a house fire breaks out. That takes months of planning in advance and a constant follow-up during the race itself. I welcome any technology that can help us with this. ‘Measurement is the key to knowledge’ serves as an appropriate motto.” The real-time data prove extremely valuable.

Luc Dhoest of the East Flanders federal police: “In the past, we determined the number of people present using findings by our people on the ground and using camera images. That involved a bigger margin of error. Proximus Realtime Crowd Management now creates a far clearer picture. The information tells us whether we need to provide extra security for busy spots or whether we should close a street. The data also form a good starting point for future improvements.”

Luc Cogneau, Sales Account Executive at Proximus: “Aside from permanent transmitter masts along the route, there are also extra mobile ones to enable even greater precision. As far as I know, this is the first time that an organization here in Belgium has been able to measure attendance numbers of this magnitude.”

The technology tells us whether we need to provide extra security for busy zones. 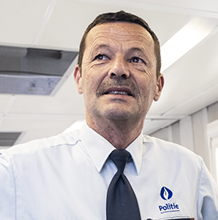 Finding out how many people visit a city or an event and where the visitors come from is a time-consuming task that calls for precision work. With Proximus Realtime Crowd Management, a local authority or an organizer can check exactly how many people are in a given location. This makes it possible to anticipate matters of security and mobility in real time.

The race is well underway

The cyclists are hard at work too. The peloton is now on its way to one of Flander’s most well-known slopes. On the sides of De Muur, a frenzied crowd screams at their heroes. Eight thousand cycling fans descend on Geraardsbergen to enjoy the live show.

2.45 pm: Meanwhile in the Crisis Center

The emergency services in the Crisis Center are naturally not paying any attention to the showdown among the tenors. They are focusing on what is happening around the course. The number of red zones on the heat maps has increased. That confirms the absolute figures. During the second passage, we record 38,600 people on the Oude Kwaremont and the Paterberg.

Joost Duhamel, chief constable of the Flemish Ardennes police zone: “Thanks to the visual support provided by the camera images, we were able to deduce that a huge crowd moved towards Oude Kwaremont and Paterberg a few hours ago. That means that there was overcrowding on the Kwaremontplein, so we decided to channel the crowd around the square towards the public zone. The data from Proximus Realtime Crowd Management help us to gain an overall picture of the security zone and make it possible to anticipate saturation points and map out the rush far better. It’s a valuable crowd control tool.”

We are now better able to anticipate saturation points. 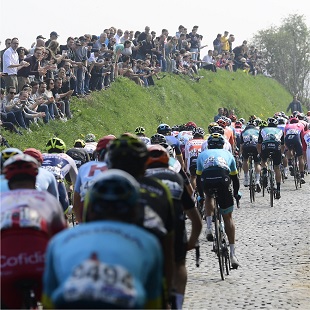 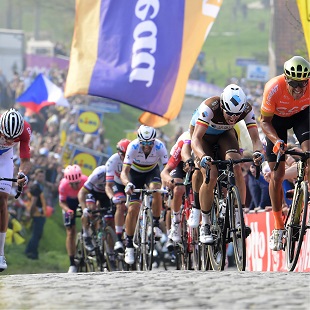 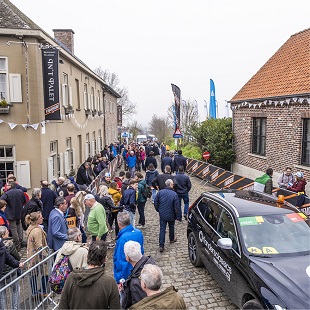 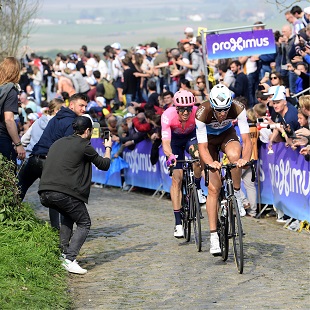 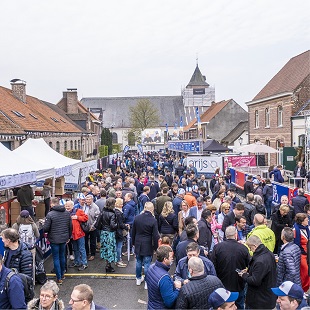 4.40 pm: Across the Oude Kwaremont and Paterberg for the last time!

The crowd has now thickened even more. No fewer than 39,750 people watch as Alberto Bettiol gives it his all. That is 7,650 more than when the cyclists came through here the first time at 1.23 pm.

Alberto Bettiol creates one of the biggest surprises in the recent history of the Tour of Flanders. He rides solo to the meet in Oudenaarde, where 13,000 enthusiastic cycling fans cheer on the Italian in the arrival area. 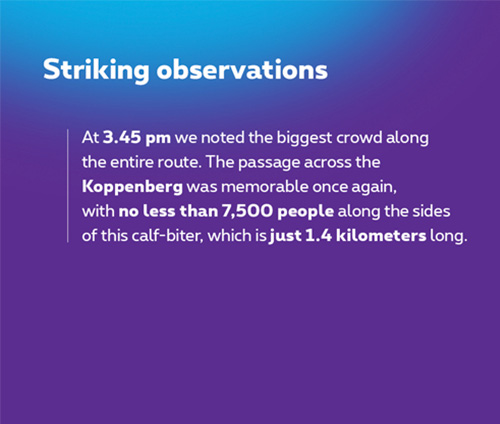 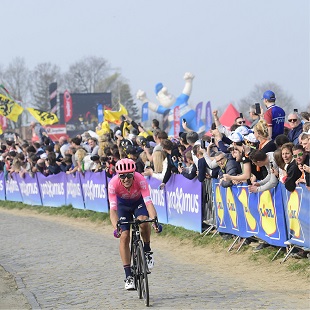 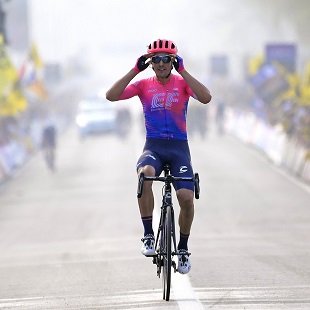 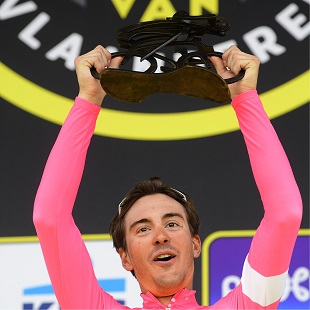 How can we help you?

We spot flags from all over the world along the route. The international character of this event is also noticeable through Proximus Realtime Crowd Management, which establishes where visitors come from. The technology offers an insight into the number of foreign cycling fans who come to see De Ronde and which municipalities, towns and cities they stay in. Oudenaarde mayor Marnic Demeulemeester, among others, has already pointed out that from a touristic point of view, such data are very valuable.

Proximus has already used Realtime Crowd Management to record the public at the Nokere Koerse cycle race in Flanders, as well.

Aalst also records the density and movement of the public during the carnival as part of a dynamic approach to security. Mayor Christoph D’Haese explains exactly how this works.