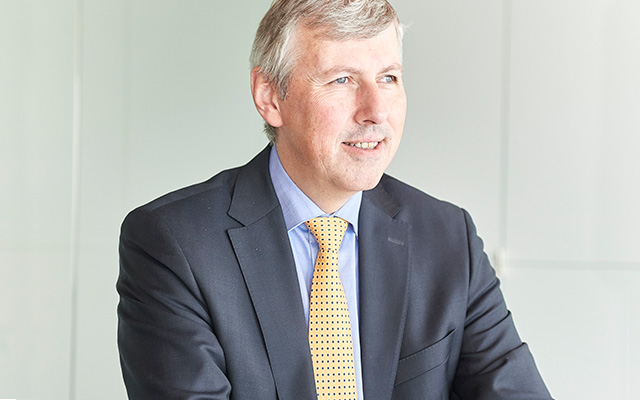 Guy Lucq calls himself a ‘change agent’ who is constantly looking for the positive impact of change. His preferred way of relaxing is a philosophical discussion over a good glass of wine.

Career
In 1989, he began as Supply Chain Manager with Unilever. After that, he became their IT Director in Belgium, and then Program Director and, from 2005 onwards, CTO, Chief Architect Europe & Global Solutions. Since 2012 he has been CIO and Partner at Deloitte.

Company
Deloitte employs 200,000 professionals worldwide, in over 150 countries. For 2014, Deloitte Belgium is expecting net income of around 372 million euros, representing a growth of 4%. The services provided are: auditing, consulting, legal and fi nancial advisory, risk management and tax services.

Employees
Three thousand people work at Deloitte Belgium in 11 locations. In 2017, the head offi ce in Diegem is to move to Zaventem airport. Guy Lucq’s central IT team has around 65 employees and extra IT specialists who make specific applications work on most service lines.

1. What is your biggest professional achievement?
I’m proud that I’ve already achieved a great many major transformations in an employee-friendly way. And I’ve always taken account of the corporate culture in doing so.

3. What don’t your staff know about you?
I have quite a lot of contacts with artists and musicians. Most of them don’t know that I once played the piano at a decent amateur level. It’s diminished over time. But now I have a piano at home again.

4. You can’t last a day without…?
Air, in every sense of the word. The problem is that we often go too fast at things and run out of breath. You need fresh air from time to time. That’s why I regularly take my teams outside to face nature and themselves.

5. Which (IT) book would you recommend to everyone?
‘Capital in the Twenty-First Century’ by Thomas Piketty, and ‘Les Identités Meurtrières’ by the Lebanese French-speaking writer Amin Maalouf. As a Lebanese Christian, he always seems to belong to a minority, wherever he is. He analyzes precisely what constitutes identity.

6. How do you see your role of CIO evolving over the next 20 years?
The CIO is, above all, becoming a ‘chief innovation orchestrator’ and a ‘change agent’. Daily technological operations will increasingly be taken care of externally and routine tasks are moving, too. Above all, the CIO needs to act as a businessman, less as a technologist.

7. You can choose: your staff work from home or come to you in the office?
I would replace working at home by mobile working, independent of time and place. We off er our employees a lot of freedom, the fl exibility comes from both sides. We still need to be able to work together productively as a team. The office is becoming the ‘nerve center for moments that matter’.