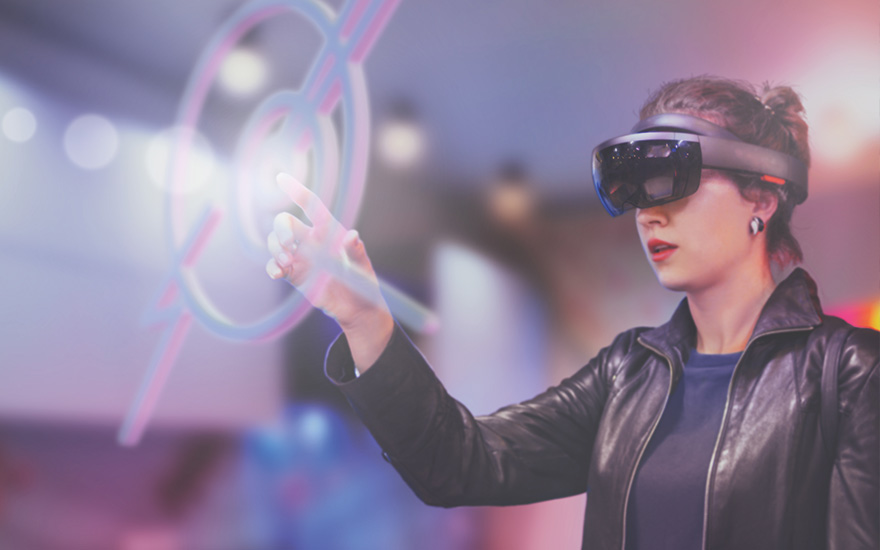 From the site manager and technician to the surgeon: thanks to smartglasses, they see more than is visible to the naked eye. Mr. Watts’ mixed reality applications allows companies to work more accurately and efficiently.

Mr. Watts develops applications for HoloLens – Microsoft's mixed reality headset. The software house’s objective is very simple: to make its customers’ businesses more efficient. The customers are mainly found in construction, manufacturing, logistics and medical imaging. "Construction was very quick to adopt this," says Wouter Martens, CTO at Mr. Watts. "Smartglasses allow you to do spatial computing; to use a computer program that is directly embedded in (and has a full understanding of) the space around you. Digital information is combined with physical objects.

For example, when you walk through a building with the HoloLens, you can 'click' on a physical elevator door after which a virtual screen is shown with all kinds of information. The digital merges with the physical, allowing you to visualize plans on a construction site, for example, in a whole new, realistic way."

Smartglasses allow you to do spatial computing. You use a computer program that is directly embedded in the space around you and with which you can visualize plans in a realistic way.

There is also a great deal of interest in smartglasses applications in the healthcare sector. "It's a very clinical device," Wouter explained. “You never need to touch it.” Mixed reality allows, among other things, the results of a scan to be projected digitally onto the body. "That kind of application is still in development. But the benefits are clear. For example, mixed reality will allow entirely new forms of operations and techniques to emerge. The HoloLens can also be used remotely to assist doctors during operations abroad. The smartglasses allow interaction in real time, thus saving on expensive travel costs."

By focusing on HoloLens, Mr. Watts makes a clear choice. "There are other vendors active and companies such as IBM, Lenovo and HP are also working on smartglasses. But we focus very specifically on the corporate world. HoloLens also has the advantage of being part of the broader Microsoft ecosystem. Moreover, the software running on HoloLens is very open." This is an important benefit because Mr. Watts develops custom solutions.

5G provides the real-time data connection between the datacenter's computing power and the smartglasses.

5G is a Game Changer

The general expectation is that the advent of 5G will significantly accelerate the adoption of applications for smartglasses. "Such a mixed reality solution for the construction industry, for example, relies on the rendering of heavy 3D models," said Wouter. "Every time you turn your head, the application adjusts that rendering." The only difference is that the calculations for this are not done in the smart glasses themselves, but in the cloud. "5G provides the data link between the computing power and the glasses. When you move your head, the glasses transmit that information and get the adjusted calculation back."

When using 5G, data traffic occurs in real time. Wouter therefore unequivocally describes 5G as a game changer. “5G brings the power of the datacenter to you: on site, at sea, wherever." Furthermore, because 5G allows network slicing, it is also very safe. "This is how we really enter the era of in-the-field computing."

Mr. Watts has been around for almost two years and has six employees. But the small startup is not exactly on its own. "We work closely with Proximus," saids Wouter. "We believe in the strength of the Proximus ecosystem." While the name Proximus creates trust among potential customers of the smartglasses applications, Mr. Watts is responsible for the innovative ideas.

"Proximus is really offering us an opportunity in this way. The collaboration with the experts at Proximus – including in the context of the 5G innovation platform – allows us to move quickly together." The partnership therefore fits perfectly with Mr. Watts’ ambitions. "We want to develop further into the leading integration partner for smartglass applications."

Mr. WattsNew window is a spin-out of the Antwerp-based software house icapps. The name of the company refers to Wade Watts, the main character in the science fiction story 'Ready Player One' by Ernest Cline, filmed in 2018 by Steven Spielberg.

Wouter Martens studied multimedia and communication technology at Howest. He is co-founder and CTO of Mr. Watts.