"IT at the heart of our profession": an interview with Eric Wilmot, CIO of Brussels Airlines 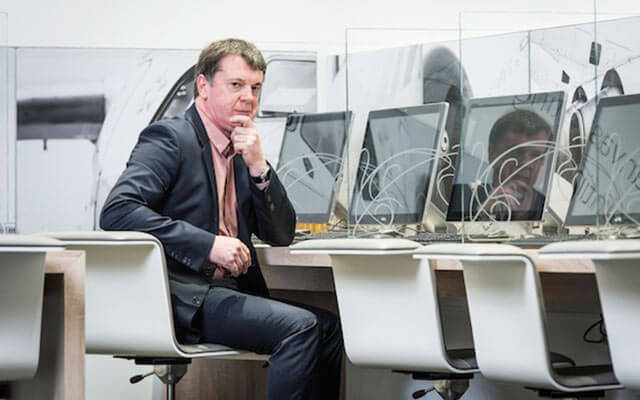 Computers, IT and the networks aren’t only used to fly the planes. They are also excellent means of providing our passengers with quality service capable of making the difference compared with our competitors, says Eric Wilmot, CIO of Brussels Airlines.

We met Eric Wilmot in the Loft, the brand new lounge area opened by Brussels Airlines at Zaventem airport a few months ago. Heading a team of around 60 people in the airline, the CIO has a clear, precise view of their mission: “Our job is to integrate solutions that make the difference in terms of customer service”, he says. We’re not interested in maintaining old systems that form a back office identical to the one in every other company. That’s not how you stand out. We need to make the best possible use of the resources at our disposal and bank on innovation to stay ahead of the competition.”

The prevalence of subcontracting

Eric Wilmot takes the example of Scan & Fly, the system whereby passengers check in their luggage, introduced by Brussels Airlines a few years ago. “It’s an example that shows how technology can be used at the service of passengers, giving them the freedom to check in their luggage when it suits them, but also to buy extra luggage. People can check in on line, and even by smartphone. Here, in the Loft, passengers have a mobile application that they can use, for instance, to book a shower or a bed, or to consult their flight details. We have meeting rooms fitted with ultra-modern equipment for videoconferences. We also use computerized solutions in flight inside our cockpits. Our pilots now have their thick paper manuals on tablets. IT is at the heart of our profession.” But Brussels Airlines does not do everything itself. About 80 % of the IT budget goes on subcontracting. “These days, IT is evolving so quickly and the level of specialization is such that it is extremely difficult to do everything in house”, Eric Wilmot explains. “For us, hiring all these specialists would represent an unjustifiable cost.”

Wilmot describes his own style of management as a skilful mix of giving people responsibility and keeping an eye on things. “The people in my team are autonomous and responsible, but at the same time I try to stay close to them to intervene if necessary. For important strategic projects, I supervise the project leaders directly. Our very horizontal organization, with few levels, allows this way of working. In fact, we are a big SME. That’s the spirit that prevails here.” After more than eight years at Brussels Airlines, Eric is convinced of one thing: the best is yet to come. “We are heading for some great times, I’m sure of it. For that matter, we’ve already seen so many really good things. Each new application that my team helps provide and perfect makes me proud and happy. I’m talking about applications that benefit our passengers in particular. Apologies to my colleagues in accounts (laughter).”

Brussels Airlines is the biggest airline flying out of Brussels, with over 90 destinations in Europe, Africa and the United States. The company is part of the Lufthansa group and employs around 3,500 people. Brussels Airlines records a turnover of about one billion euros and will carry over seven million passengers in 2015.

Eric Wilmot studied applied economic sciences in Louvain-la-Neuve. He then worked at the Walloon Region Informatics Centre before joining Sabena. In January 1994, he became one of the first members of staff at Proximus – Mobile network. He joined Brussels Airlines in May 2007.