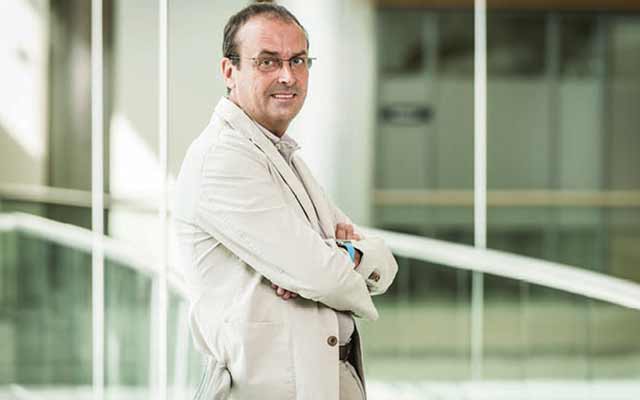 Researchers in white coats who stand stirring things in Erlenmeyer flasks? That may still be the case to some extent. But when it comes to developing new medicines, these days it’s just as likely to involve an array of IT equipment and technology. Brand new CIO of the Year 2016 Herman De Prins of pharmaceutical company UCB explains.

From accounts and marketing to the divisions where new medicines are developed, there’s no one here now who doesn’t work with technology,” says Herman De Prins. “In our labs, every experiment is captured electronically these days. This is the only way we can extract as much information as possible from the data. It involves a substantial amount of big data and data analytics. We also run hundreds of scientific applications, for computer aided drug design, for instance.

With apps like this, the cloud and high-performance computing play a major role, as well.” Over the past few years, the use of technology has progressed even further. “In clinical studies, we now introduce sensors and wearables with accompanying apps for patients. That way, for instance, we can generate additional data which either come from the sensor or are entered by the patient. This gives us a better picture of how the patient is dealing with the illness.”

Is there a computer in the room?

Developments in e-health are happening at lightning speed. Will we ever leave diagnoses to computers? “The doctor will always have the final word, but computers will be trusted more and more. Look, how does a doctor reach a diagnosis at the moment? His judgment is formed by his training, additional training that he follows and his practical experience. A system of artificial intelligence in combination with access to clinical data can generate insights based on data from millions of patients. It would be crazy not to do anything with that.” The IT department at UCB now has a team of about 240 people. “There is a very wide range of profiles,” said De Prins. “Infrastructure specialists, SAP architects, but also more and more digital specialists and data scientists. They are still rare, but we can attract them fairly well. UCB’s good reputation has a lot to do with that.”

De Prins describes his own management style as one of healthy delegation. “The hierarchy is there, but I do try to be in tune with my people. I try to delegate as much as possible in projects. For me, a project stops once the budget has been approved. After that, I just get to deal with escalations. It would be impossible for me to follow up every project in detail. I do set aside a lot of time for putting out feelers and going out on the road myself. For instance, a trip to Silicon Valley is planned soon. We’re going to look at how startups approach things and anticipate our own future. It’s good to find out how different clocks tick.”

UCB (www.ucb.com) is a worldwide biopharmaceutical company that focuses on discovering and developing innovative drugs and solutions to transform the lives of people with serious illnesses in immunology and neurology. The company has over 7,500 employees in around 40 countries. In 2014, its income amounted to €3.9 billion. UCB is listed on Euronext Brussels.

Has been CIO of UCB since October 2009. Before that, he was Vice-President IT at Medtronic and IT Director at Guidant and Abbott Vascular. He spends much of his free time cycling. He was elected CIO of the Year 2016 by datanews.