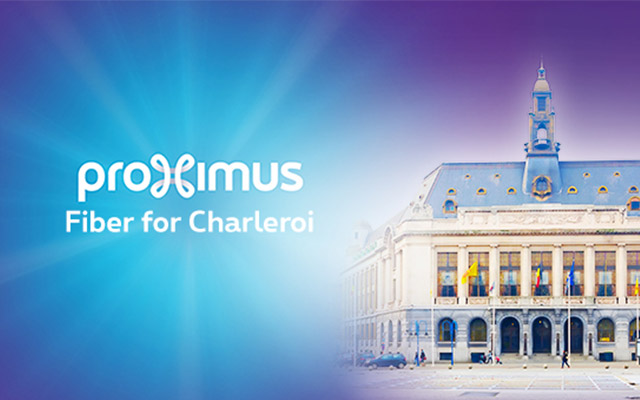 As announced in December, Proximus is starting to roll out Fiber in a number of densely populated urban areas, including Charleroi. In the weeks and months to come, the entire city center will be equipped with it, which will enable a large number of Charleroi businesses and households to be connected to Fiber.

Over the past few years, Proximus has already connected close to 60 businesses to Fiber in the city of Charleroi. With the launch of the "Fiber in Charleroi" project, Proximus is now the first operator in Belgium to also bring Fiber into existing residential homes.

Why do we need Fiber? Data traffic and digital services will continue to grow exponentially over the next few years, driven mainly by video and cloud applications and the Internet of Things. As a pioneer in the field of network technologies, Proximus intends to anticipate its customers’ needs and get its infrastructure ready for the future.

Having been at the cutting edge of Fiber technology for many years, Proximus therefore launched the "Fiber for Belgium" investment plan in December 2016. The plan aims to speed up the roll-out of optical Fiber in Belgium and to cover more than 85% of businesses and more than 50% of households.

Fiber is the ultimate broadband network of the future, for both residential and business customers. Fiber technology means that all members of a household can browse the Net, watch streamed content and play games online, all at the same time and with no latency or loss of quality. They also get the sharpest possible images on all their screens. What’s more, Fiber is the perfect solution for business customers because, as well as allowing people to work together more efficiently, it offers increased reliability and better data protection.

From a financial and operational point of view, it clearly makes sense to combine the deployment of Fiber to both businesses and existing homes in densely populated urban areas. That’s in fact what will be done in Charleroi, where Proximus will roll out Fiber for business and residential customers at the same time.

An opportunity to ensure an innovative future for Charleroi

The roll-out of Fiber will clearly be a part of the movement to revitalize the city of Charleroi. Firstly, because Fiber will enable Charleroi inhabitants and businesses to access the most advanced digital services, which can only benefit growth and employment in the city and its surrounding region. And secondly, because this fixed network of the future opens up a whole world of new possibilities for the digitization of the city.

Thanks to the implementation and optimal coverage of Fiber, Wallonia's largest city will find it easier to continue its technological development for the benefit of all players on its territory: it will result in institutions that are closer to the citizen, businesses that are closer to their customers, and an optimized management of the city's resources. To secure its position in the digital era, Charleroi, in partnership with ORES and the SWDE, recently agreed to invest in smart meters, which will enable a thorough analysis to be made of the energy consumption in municipal buildings.

In addition, it would not have been possible to give concrete shape to the recently rethought parking system in the city center without making use of the digital dimension. In 2016, Charleroi appointed a project manager to coordinate the "Digital City" project and come up with an ambitious digital strategy for the city.

Proximus will be communicating openly and transparently with all the inhabitants and businesses in the areas covered by the Fiber roll-out. Starting in spring, the deployment of Fiber up into existing buildings will simultaneously start in Charleroi city center and in 10 business parks located on the outskirts of Charleroi. In the coming years, Proximus will deploy Fiber in 15 municipalities of Charleroi: Couillet, Dampremy, Gilly, Gosselies, Goutroux, Jumet, Lodelinsart, Marchienne-au-Pont, Marcinelle, Monceau-sur-Sambre, Montignies-sur-Sambre, Mont-sur-Marchienne, Ransart, and Roux.

Thanks to a communication plan designed specially for the inhabitants of Charleroi, including - amongst other things - a 0800 number and information in shops, citizens will be kept well-informed about both the roll-out schedule and the benefits of Fiber.

It is also important to underline the fact that any inconvenience caused by the work involved in laying the Fiber will be kept to the bare minimum. Indeed, Proximus will be carrying out an analysis before work gets underway in order to optimize the roll-out operation and, as far as possible, opt for connections on building facades rather than underground.

In consultation with the city of Charleroi, the optical Fiber roll-out works will, moreover, be done as much as possible in synergy with the works planned by the city, in particular those of the "Rive Gauche" building site. It is in fact for this reason that Proximus has opted to start off with the city center of Charleroi.

The optical Fiber roll-out is a further opportunity in the economic and urban redeployment that is transforming the heart of the city. The city, which is conducting its revitalization operation by overhauling the public space, culture and business and soon opening a brand-new shopping center, can of course not dispense with the opportunities that the digital era offers. It represents a true added value for our institutions, our schools - of which a large number are already equipped with digital educational media - and our businesses. It's a further opportunity of ensuring an innovative future for Charleroi.
- Paul Magnette, mayor of the city of Charleroi

In the coming months, the extraordinary capacity of optical Fiber will enable the city of Charleroi to move into a higher gear in terms of digital services for its citizens and businesses, and in so doing, enable it to realize its great smart city ambitions. With "Fiber for Charleroi", Proximus intends to help Charleroi build its digital infrastructure for the future.
- Dominique Leroy, the Proximus CEO