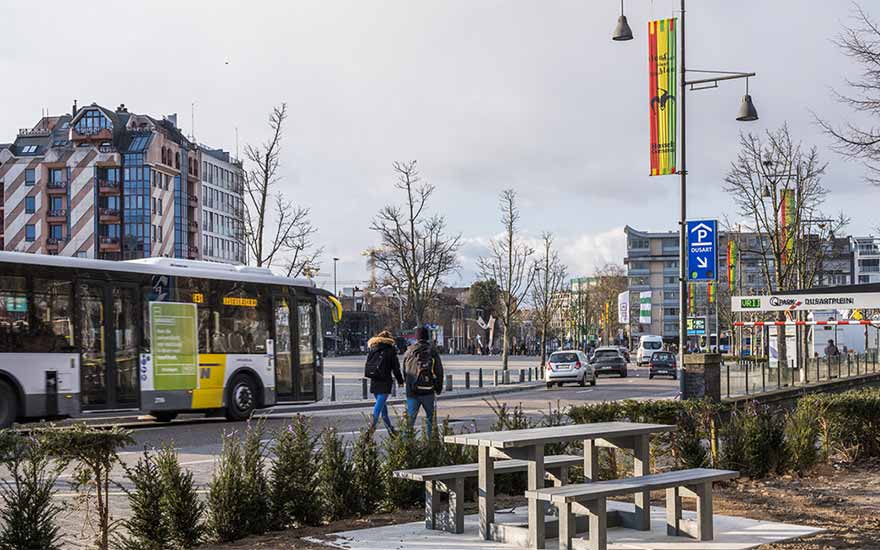 On 16 April, the city of Hasselt launched an ambitious new traffic management system. What does this system make possible?

The project began about three years ago as a parking management system,” explains Habib El Ouakili, Councilor in charge of Mobility. “But it soon became clear that we could use the new digital technologies for a far more ambitious system, one with which we could not only indicate the available parking facilities in the city, but actually direct the traffic flows along the right route to the right parking space. Because what may be the best route for a driver today might be anything but that tomorrow.”

Various measuring technologies are used to find out how many cars are already in a parking lot. Underground and surface parking lots equipped with a barrier system are connected to this installation by a software link. Parking lots with clear, demarcated accesses are equipped with inductive loops in the road surface at the entrances and exits. In parking lots with a more complex structure, parking sensors are fitted in the asphalt in each individual parking space. But the panels will not only indicate the parking lot occupancy level, they will also give the time it takes to get there, a first in Flanders. That way, drivers can opt for a parking area that is slightly further away but quicker to get to.

“For this, we work with Floating Car Data from Be-Mobile,” explains Tim Hemeleers, traffic expert from the Mobility and Parking service. “Via track-and-trace systems in fleet vehicles, taxis, public transport and the users of certain navigation apps, they can give us a very accurate picture of the traffic flows in the city in real time. And the system as it is now is not the end. In the future we plan to connect it to the traffic lights, for instance, and direct these as well. We also want to encourage people to switch from cars to buses or bicycles by displaying information on LED panels near our parking lots on the outskirts of the city about the bus timetables, or where you can find a bike sharing station.”

With almost 80,000 inhabitants, Hasselt is the largest city in the province of Limburg. It is very popular with shoppers and foodies. For culture enthusiasts, Hasselt has a fashion museum, a gin museum and the largest Japanese garden in Europe.

“We have couple of two-way cycle paths in the city,” says Habib, “and often, drivers look right to check whether there are any cyclists, but not left. That leads to dangerous situations and unfortunately sometimes accidents. So we are going to equip these cycle paths with LED lights which light up when cyclists are approaching, so that drivers are warned. That system is already used in places like Eindhoven.”

“The ultimate aim must be a carfree city centre,” Habib declares, “to guide people to a parking space that is the best placed for them as quickly as possible, without them having to go and park in residential districts. The data that we are collecting now (which, to be clear, is totally anonymous) is an important policy instrument here. We will be able to take decisions on the basis of objective data. That’s my advice to city authorities that are thinking about something similar: embrace the technology. It’s available, it’s no longer expensive and it offers fantastic possibilities.”

Habib El Ouakili is a technical engineer, specializing in microprocessors. He began his career with the car manufacturer GM and also worked for HP. In 2014, he went into politics and became a member of the Hasselt municipal council.

Tim Hemeleers followed a master’s course in transport studies at Hasselt University, where he graduated in 2009. He previously worked for a consultancy firm for three and half years and spent six months with the commune of Peer. He has worked for the city of Hasselt for four years as Project Leader for mobility projects.

The ultimate aim must be a carfree city centre,” Habib declares, “to guide people to a parking space that is the best placed for them as quickly as possible, without them having to go and park in residential districts.

Habib El Ouakili, Councilor in charge of Mobility at the Hasselt municipal