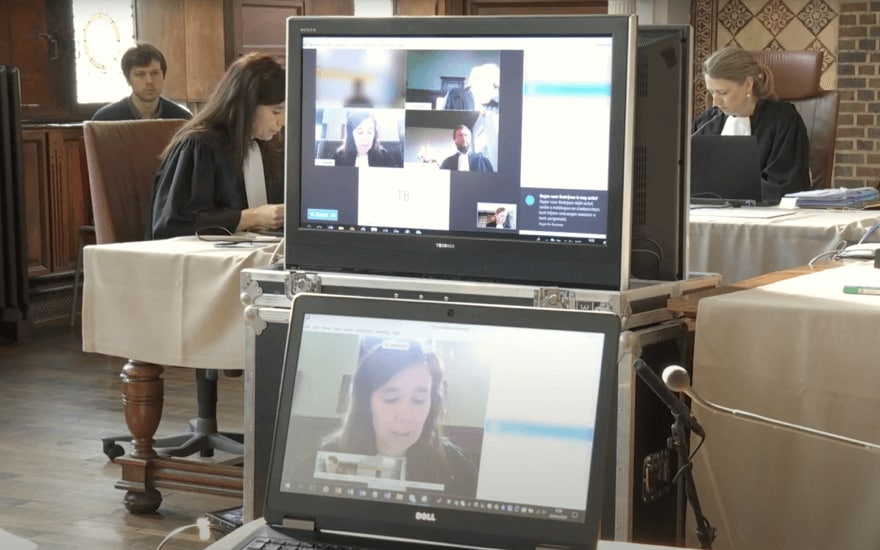 Corona accelerated digitalization at FPS Justice. The courts, for example, switched to video conferencing at a record pace. A radical digital transformation is on the agenda for the following years.

“The lockdown elicited a huge demand for telework and video conferencing”, says Ivan Verborgh, ICT director at FPS Justice. The digital route offered a rapid solution, guaranteeing the service provided by the justice system. The reality of working from home also strengthened the role of the e-Deposit application, which lawyers and citizens could use to submit correspondence, conclusions and procedural documents in a specific file at the court. The ultimate goal is the digitalization of the entire chain: from the police, via the public prosecutor’s office, to the detention system and the courts.

Since the start of the pandemic, the use of video in court has made a huge difference. “Whenever it is not possible to be present physically, video offers a practical solution”, says Theo Byl, examining magistrate and chairman of the Court of First Instance in Mechelen.

The roll-out of Cisco Webex happened exceptionally fast. “We got the licenses on Friday”, said Theo Byl. “And by Monday we were already using it.” Which meant that the court could continue to handle both criminal and civil cases, even when the lockdown ruled out a move to the court. “In criminal cases video sittings were positively received because the parties concerned were perfectly able to follow what was happening in the courtroom. In civil cases lawyers can plead the case via video link from their office.”

Even after the pandemic, the judiciary will continue to use video in court. The benefits are undeniable: among them the fact that hearings are more efficient, lawyers are not required to move around so much, and the security risk is lower because prisoners do not have to be transferred.

The ICT staff service and the council of the courts and tribunals are working on a bill that is supported by all stakeholders to make video conferencing legal. With 3 test set-ups in at least 5 different buildings they are going to check which infrastructure meets all the requirements. After this analysis there will be a general roll-out of video hearings across Belgium.

In criminal cases video hearings were positively received because the parties concerned were perfectly able to follow what was happening in the courtroom.

Theo Byl, chairman of the Court of First Instance in Mechelen

For minister of Justice Vincent Van Quickenborne, the use of video is only the first step in digitalization. The minister is not advocating a revolution, just an action plan. “We need to look at the digital building blocks that already exist and see how we can fit them into a new system. The investment in a modern IT set-up forms the basis for that further digital transformation, together with the introduction of a global digital file for each court case.

Theo Byl: “The global digital file will be produced in digital form right from the outset, for example by the police force that creates the report. The prosecuting magistrate and the court can then continue to work in the same file. This is a modern and efficient way to handle cases.” Magistrates, lawyers and parties concerned will then have safe and easy remote access to the digital file. That file also needs to contain links to other services, such as FPS Finances.

Vincent Van Quickenborne: “Corona has made everyone aware that video and technology are the solutions to the challenges of the future. New equipment will be available from this year onwards. We are going to invest tens of millions of euros in the digitalization of the judiciary.”

Digitalization in the court in Mechelen

Theo Byl is examining magistrate and chairman of the Court of First Instance in Mechelen.

Video calls from any location?