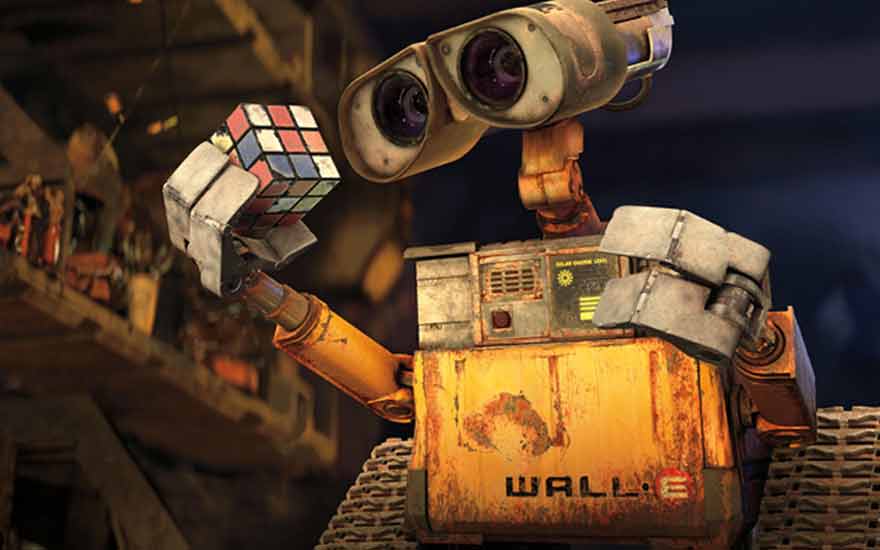 Artificial intelligence is depicted in myriad ways on the big screen: from real robots in Wall-E and humanoid machines in Metropolis, to virtual assistants living inside computers in 2001: A Space Odyssey. “In the end the task for which they are employed will determine what the robots look like,” says Cédric Mulier.

“In the age of artificial intelligence, we’ve just graduated from kindergarten. Lots of businesses are dabbling in it, but it will be a while before we can talk to a personal assistant like Samantha from the film Her or HAL 9000 from 2001: A Space Odyssey. By 2020 we expect half of all new apps to be equipped with some sort of artificial intelligence. It will start small, and grow from there. Which is  normal, because it’s a never-ending learning process.”

“Watson, the IBM AI system, can currently read 80 million documents per second. That means it can scan cancer patient files and give advice about treatments, including an estimated percentage of their likely success rate and the reasoning behind the advice. But the doctor always has the final word. He or she decides. That’s why I prefer to call it ‘augmented’ intelligence rather than artificial intelligence. Watson can also be an added value for maintenance engineers and marketers. Its intelligence improves our lives and our work.”

“One important feature of AI systems is that they are autodidactic. The more input they get, the better their output. At the moment, that input consists primarily of text and speech. In the labs and in pilot projects with clients we’re already testing with colors, tastes and even vibrations. This means that artificial intelligence can, for instance, detect a fault in your washing machine or an airplane engine. Colors can also be inserted so that a robot learns to identify organic fruit. Because pesticides often cause minuscule color anomalies.”

“In some cases it is useful to make a robot look human. For example, if they are employed in a hospital or crèche. It helps patients and children to accept them and feel comfortable with them. In the end, the task for which they are employed will determine what the robots look like. An autonomous drone carrying out inspections over chemical factories doesn’t have to look like a human being.”

“The big question remains unanswered: will human and machines ever merge and become indistinguishable, like David in the film A.I. Artificial Intelligence? Personally, I can’t see that happening. A machine is inherently different from humans. We have a moral code, an education, we know right from wrong. Machines ‘think’ in probability and numbers. They don’t have dreams or creativity; they don’t have feelings or emotions. They don’t ask existentialist questions. So I’d classify robots that threaten mankind as the work of pure science fiction. And I’d go further and say that machines are not a threat, but an opportunity for mankind.”

Apart from a spell at SAP, Cédric Mulier has worked for IBM since 1996. He is currently Industry Consulting Lead at Big Blue.

Model cyborg: the self-confident Maria is taken prisoner and replaced by a robot, which is indistinguishable from the real Maria. She is the model for pretty much every cyborg – a hybrid of human and machine – in science fiction films.

Evil AI: the most iconic AI in cinema history is probably HAL-9000, the virtual assistant on the spaceship Discovery One. When the crew question HAL’s ability to make decisions, he starts killing them. The last survivor, David, has no choice but to switch him off manually.

“Am I a real boy?”: the artificial boy David has the feelings and desires of a real boy. Monica takes him home to fill the emotional void that has opened up since she put her terminally ill son into an artificial coma. David is faced with a whopper of an existential crisis when the son wakes up again.

Artificial love: Wall-E has more feeling than intellect. For him the Rubik’s Cube is a colorful toy, not a puzzle for testing the brain. Wall-E falls head over heels for the super droid EVE. Robots with feelings? Impossible, thinks Cédric Mulier of IBM.

The Turing Test: a talented programmer does the Turing Test with the beautiful robot Ava. He wants to know whether a machine can acquire the same intelligence as a human. After a few days of trial conversations, Ava appears to be capable of just that. Or is she just stringing him along?