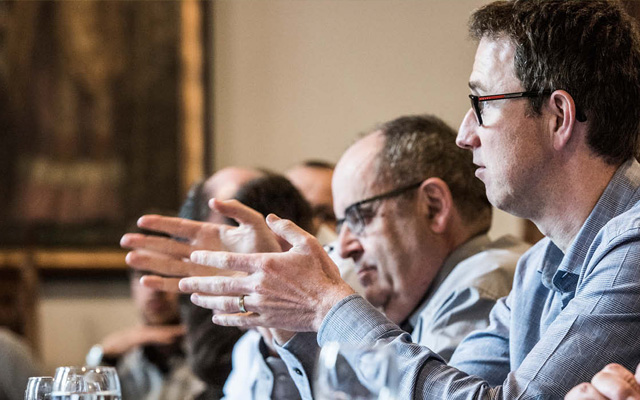 EnergyVille carries out research into sustainable energy and smart energy systems. It combines the expertise of VITO, imec and KU Leuven. “We work out practical applications for companies and public authorities,” says Helena Gerard. The Senior Researcher at VITO/EnergyVille looks ahead to new standards in energy efficiency and sustainability in Belgium.

To find out where you can improve energy efficiency, you must take stock of the existing situation. “So we published a thermographic map of the city,” says Lieven Dehandschutter, Mayor of Sint- Niklaas. “On it, everyone can see how well or badly their home is insulated.” In addition, Sint-Niklaas encourages electric cars. “And we are systematically switching to LED lighting,” says Carl Hanssens, a municipal councilor in charge of mobility and the local economy. “That brings considerable savings.” If you want to deal more efficiently with energy, you need practical solutions. “It’s important not to be obsessed by the risks involved in new things,” says Peter De Pauw, Head of Business Development & Strategy at Eandis. “After all, not embracing new developments involves risks, too. The energy sector is evolving at lightning speed. You have to react quickly so as not to miss opportunities.”

“The most important thing is clarity,” according to Professor Ronnie Belmans, CEO of EnergyVille, the cooperation initiative between energy specialists at KU Leuven, Imec and VITO. “There must be clear ambitions, at the lowest possible social cost and with the most convenience for the user. The main objective is to reduce the CO2 emissions. Lowering energy consumption is secondary, because we are switching to renewable energy.” At Colruyt, sustainability has long been high on the agenda. “Our first wind turbine came into operation in 1999,” says Saartje De Boever, Advisor Business Economics & Policy at Colruyt Group. “We’re involved in wind farms, and we also install solar panels and work with alternative fuels.” All this contributes to a sustainable business model. But many companies don’t yet feel ready for it. “NOMBA – not on my balance – is a problem,” says Philippe Dedobbeleer, Director at Belfius and member of the board at Belesco, the Belgian federation for service providers in the energy sector. “All too often, companies still leave energy projects to one side.”

Many families and companies have already switched to photovoltaic panels. The use of heat pumps is increasing, too, and more wind turbines are continually being erected. But the big challenge lies not so much in the production of energy, but with the user. “The production of solar and wind energy is volatile,” says Peter De Pauw. “Users are going to have to follow the availability of the energy, whereas conventional power stations match the supply to the demand.” Local energy storage is a possible avenue, but it’s not yet an immediate solution – certainly not on a large scale. “So there is a real need to cut down on energy consumption,” says Frank Geets, a board member at the Vlaams Energiebedrijf, the organization tasked with reducing energy costs in the public sector. “It’s misleading to say you don’t have to use renewable energy economically. To achieve the 2030 goal – a 40% reduction in CO2 emissions – we really will have to adjust our behavior. Not just by switching to green power, but also by deploying energy-saving solutions.”

But where are we today with these smart applications? Are they mature enough yet? And are we investing in the right things? “There is still a gap between hype and reality,” says Kris Van Daele, CEO at Fifthplay, a Belgian developer of smart solutions and a subsidiary of the Niko Group. “People planning a new home today may not move in for two years. Deciding on technology now is very difficult. A solution today will be hopelessly out of date in two years.” Smart solutions not only have to help consumers and companies use less but also, and above all, help to plan usage at different times. “It’s about bringing demand and supply into line with one another,” says Saartje De Boever, “and at the same time responding intelligently to an imbalance. There’s no lack of potential. For instance, we use wind power to produce hydrogen, which is then used as fuel for the forklift trucks in our warehouses.”

At the core of the issue is a lack of insight. Smart meters can record energy consumption over time. Peter De Pauw: “Apart from these smart meters, consumers today are hardly given any incentive to adjust the volume and time of their consumption.” What’s more, energy costs are relatively low. “So consumers and companies have little enthusiasm for making energy consumption more efficient,” says Jochen De Smet, energy consultant in Minister Tommelein’s office. “A lack of knowledge about the advantages of possible solutions is often a barrier to investing in energy efficiency.” That lack of knowledge was clearly shown when 30,000 families in Zeeland were given the opportunity to have a smart meter fitted in their home virtually free of charge. The campaign yielded barely 150 responses. So it all starts with awareness, because as long as consumers and companies don’t know what the benefits are, they don’t show any interest.

The sector is looking to the government to create this awareness. “There’s no lack of incentives,” says Frank Geets. “Anyone who builds or converts can count on a lot of support, including help with installing a heat pump or photovoltaic panels.” There is always room for improvement. “Perhaps there are too many incentives these days,” says Ronnie Belmans, “and it’s all a bit too obscure. What we really need, above all, is simplicity, so that consumers can come on board easily and at the same time benefit from greater comfort and smaller bills.” Meanwhile the transition in the energy landscape will continue to gather pace, quite apart from government initiatives. “Compare it with the rise of the drone,” says Kris Van Daele. “The devices came first, and the regulations followed. That’s where we’re going with the energy sector, too. Everything is evolving far too quickly for this.”

As energy requirements continue to increase – for ICT and electric cars, among other things – there is an urgent need for greater energy efficiency. But a real revolution in energy consumption calls for a change in behavior. Before that comes, there is still a great need for awareness, among consumers and companies.